This is not a ranking for the most prestigious high schools, but simply a return to history and to the time when education was a value and the graduates were proud to belong to schools with traditions

We tell stories about the streets under the hills, about the beautiful old buildings and about the famous fellow citizens, but why not pay attention to the iconic high schools, thanks to which educated and successful citizens of Plovdiv grow up. This is not a ranking for the most prestigious high schools, but simply a return to history and to the time when education was a value and the graduates were proud to belong to schools with traditions. 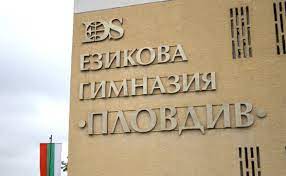 The idea of ​​the Ministry of Education to establish the school arose among the Plovdiv intellectual community after a visit by a delegation from the German Democratic Republic in 1958. The original intention was to open a German language school, as England at that time was behind the Iron Curtain and it was too bold to ask to learn English. Gero Grozev (then Deputy Minister in this area) accepted the proposal unconditionally and ensured its implementation. Instead of a high school teaching German, the Ministry of Education decided to open a high school teaching English. Thus, on 05.08.1958, an order No. 2 1-4274 was issued by the Ministry of Education and Culture for the opening of a Mixed High School with English language teaching in Plovdiv. This is why it is still better known as the English High School. According to the order of the Ministry, 75 students had to be admitted the first school year, divided into 3 classes. Since the founding of the school, according to item 2 of the order of the Ministry of Education and Culture, there was a boarding house for all students and teachers.

After its establishment, the Municipal Council of Plovdiv designated the Seminary as its first building. The first person who was appointed and took care of the organization of the school was Eldora Bozhinova (Nesheva), an English teacher who had arrived from Lovech. The first manager of the dormitory, Boris Kuzmanov, was also appointed. He and Eldora Bozhinova began a hectic work for the preparation of the first school year.

On October 6, 1958, the first and longest-serving director of the high school was appointed - Lyuben Hristov. He was only 26 years old. Graduated in English Philology at St. Kliment Ohridski University of Sofia, specialized in English in Leeds, England and in Austin, Texas, USA, winner of several prestigious awards - Order of Cyril and Methodius III degree, Honored Teacher and Honorary Citizen of Austin, he dedicated his whole life to building the reputation of the school. He was the director of the high school until his retirement on March 13, 1992.

The first school year was opened on September 15, 1958, but classes were held in the premises of the Dimitar Blagoev High School, as the classrooms were not ready yet.

Regarding the dormitories, the students initially spent the night in the Roza Dimitrova Home for Children and Adolescents, and on October 13, 1958 the graduates were transferred to their own renovated dormitories in the Seminary - one for all 60 girls and another for 21 boys. A week later, classes began to be held in the renovated classrooms of the Seminary.

In the first years of the establishment of the high school, all students were required to live in the boarding house, regardless of whether they were from Plovdiv and had good conditions at home or came from the surrounding area.

Immediately after the beginning of the first school year, a choir was organized at the school, in which all the girls participated; there were also a drama club and two sports sections - one in basketball and one in athletics. In the later years a dance troupe, a variety orchestra, wind music and others were created in the high school. In October 1958 The first sports Spartak games were also held with cross, athletic competitions and basketball competitions. This later became a tradition. In November 1958 Lyuben Hristov composed the text of the school march, and the music teacher Toni Yanakieva gave it a melody. Thus was born the anthem, which for many years was one of the emblems of the school.

In the next school year, school enrollment began to increase. New teachers were also being appointed. On September 19, 1959, the first two teachers from England arrived - Ann Slater and Mary Mason.

Until the spring of 1960, the school had no name. After an in-depth study, director Lyuben Hristov chose the name of the Social Democrat and master of speeches Georgi Kirkov. Sofia approved the choice and the high school was named that way. The graduates proudly began to call themselves Kirkovtsi. The name was retained until the early 1990s, after which the high school was renamed. On May 11, 1960, the first patron’s day was celebrated. The high school officially received its new name that day, as well as its first school flag. The celebration of the patron's day in the second week of May became an invariable tradition until the 90s.

On May 19, 1960, the first solemn school concert was held in the Kultura cinema. The tradition of celebrating important events with a rich artistic program remains to this day.

The hard work of teachers and students soon paid off. High school graduates began to win top places in competitions, contests and exams in all scientific and sports categories, and most students began to glorify the high school abroad, studying at famous and very prestigious universities in England, USA, Canada, Germany, France and other countries. There are dozens of individual and collective awards for educational, sports and artistic activities, won by the graduates of the school from its inception until today.

In 1967, a celebration was organized for the first time in which high school students said goodbye to the school, classmates and friends, one by one passing to kiss the flag of the high school and shake hands with the principal and teachers. This ritual, although changed over the years, is still observed today.

In 1976 the school moved to the newly built building at 123 Bulgaria Blvd in Plovdiv, where it is still located today, and in the winter of 1977 the students now live in the building of the new dormitory near the high school. In 1982 Plovdiv Language School was already among the few schools in the country associated with UNESCO.

On May 19, 1983, on the occasion of the 25th anniversary of the school, the State Council of the People's Republic of Bulgaria issued a decree No. 1517, by virtue of which the high school was awarded the Order of Cyril and Methodius – 1st degree (gold) for high academic achievement. In September of the same year, classes with intensive study of German and French were opened.

In 1990, the school introduced a second foreign language - German, French or English, depending on the profile of students. Two years later, in 1992, the classes with a French language profile were separated into an independent language high school, and in the complex of the Georgi Kirkov High school with teaching of Western languages, the English language and German language profiles remained.

After the retirement of Lyuben Hristov in March 1992, the school was managed by Mrs. Nelly Noncheva for some time, and then Valentin Karaminev was appointed director. He was its head from 1993 to 2008 and continued the already established trend. He included the DSD (II) der KMK exam as part of the training in Plovdiv Language School and began an exchange project - Bulgarian children went to Germany and vice versa - Germans came to Bulgarian families. During the time of Valentin Karaminev, the high school was established as an examination center of Plovdiv and Pazardzhik regions for obtaining Cambridge certificates. It was then that it received its new name – Plovdiv Language School. For his contribution to the development of education in Bulgaria and the high school in particular he was awarded the honorary award of the Ministry of Education and Science Neofit Rilski in 2001.

In 2008 the school celebrated its 50th anniversary. The interim director at that time was Mrs. Lyuba Popova. On May 9, Europe Day, a solemn ceremony of consecration of the new flag was held in the yard of the high school. It combined the emblem of the city of Plovdiv with that of the school.

In the period 2009 - 2010 the director of the school was Mrs. Mariana Gencheva, and then until 2014, Mrs. Penka Staykova was temporarily acting in this position. Since July 16, 2014, after a competition, the position of director of Plovdiv Language School was held by Mr. Nikolay Radev.

The turbulent political changes in our country predetermined the renaming of the school in 1945. The first director of Lilyana Dimitrova was Nadezhda Petkova.

In the period of 1951-1955 it was headed by Iliya Grigorov. In 1954, the patron's day was celebrated for the first time. In the next school year the director was Dimitar Stoyanov.

From 1956 to 1980 the school was under the leadership of Penyu Penchev. It became a republican champion twice - at the second and third national school examinations in 1958 and 1960, and during the fourth republican examination in 1962 it was declared exemplary.

From 1980 to 1982 it was headed by Vladimir Milushev. The largest functional reconstruction of the buildings was carried out. The 40th anniversary was solemnly celebrated.

From 1982 to 1998 the director was Petranka Kasakova. During this period a there were many art activities, awarded many prizes. Another main direction was the rise of the Francophonie - integration ties were established with a lyceum from the city of Le Mans, prizes were won at theater festivals in Rouen, La Roche, Arad and Pecs.

On November 20, 1991, according to a decision of the Municipal Council in Plovdiv, Lilyana Dimitrova was renamed into the St. Patriarch Evtimiy School.

From 1998 to 2010 the director was Nevena Kolemanova. School life developed according to the educational tendencies of the European cultural family. The good traditions were combined with the leading educational practices of Valentina Stoencheva-Georgieva, who since 2010 has been leading St. Patriarch Evtimiy Secondary School, which since August 1, 2016 is the legal successor of St. Patriarch Evtimiy School. Next year the school will celebrate its 80th anniversary.

In 1937-1938 a Mixed High School was formed in Plovdiv by separating students from all classes of the then existing in Plovdiv boys' and girls' high schools, which were from the villages surrounding Plovdiv and from the orphanages. In the school year 1942-1943, with the separation of the students in the Tsaritsa Joanna Second Girls' High School, the school was transformed into the Second Boys' High School, and from 1945 to 1950 it was the Georgi Dimitrov Second Boys' High School. In the autumn of 1950, it was renamed the Georgi Dimitrov Sixth Mixed Secondary School. It was then housed in the building of a former Jewish school next to the Grape Market - a stylish two-storey building with a large yard, a fence and a beautiful portal.

From 1983 to 1984 after the unification with the V. I. Lenin Primary School, it was now named Georgi Dimitrov Unified Secondary Polytechnic School. In 1988, for the successes in the educational activity and in connection with the 50th anniversary of its founding, the school was awarded the Order of Cyril and Methodius 1st degree with Decree No. 1675 of the State Council of Bulgaria.

The school has a tradition in the specialized training in natural sciences - biology and chemistry. In May 2018, it celebrated its 80th anniversary, noting that most of the doctors in Plovdiv were trained in it.

And what is your high school and do you know its history?

Just because it's winter it doesn’t mean you have to sacrifice your social life. There are plenty of places in Plovdiv where it’s just as warm and cozy as it is at home